It is important to have realistic goals in terms of where we believe gold pricing is headed, and more importantly how long it will take to get there. First and foremost, we must acknowledge the tremendously large move that we have seen over the last four trading years. The multiyear correction began in the middle of 2011 and concluded at the beginning of 2016.

This correction took gold pricing from its all-time record high above $1900 per ounce to just above $1000 per ounce. In other words, gold has lost almost approximately half of its value in five years. However, that all changed when gold pricing dropped to a low of 1045 at the end of 2015 and began to rise in 2016. By April 2016 gold had gained a little over $300 and traded to its highest value since the correction at $1378.10.

Market participants and investors remember the period between the middle of 2016 through 2019 when gold prices had tremendous resistance at $1380 and had three failed attempts at taking out that price point. It seemed as though a break above $1400 was unachievable for a protracted time period.

Finally, in 2019 we actually saw gold prices begin to make a strong bullish run to higher pricing. In January 2019 gold was trading roughly at $1280 per ounce, and by August of that year it would climb to its highest trading value of the year reaching $1560 in just eight months. After a short correction, gold pricing moved back into rally mode and closed at $1560.

This year we have seen tremendous price swings but the result has been that gold trading to its highest price point since the multiyear correction ended in 2016 hitting $1788 per ounce.

Currently prices have been trading sideways for the last three months. As it stands now gold futures have been trading in a tight range and are currently fixed at $1730 per ounce. More so in the last 6 months in which gold has risen over $500 the U.S. dollar has moved an astonishing 7 whole points higher from a low of about 95.50 to 103.72 three weeks later back to where it rests currently 97.42. 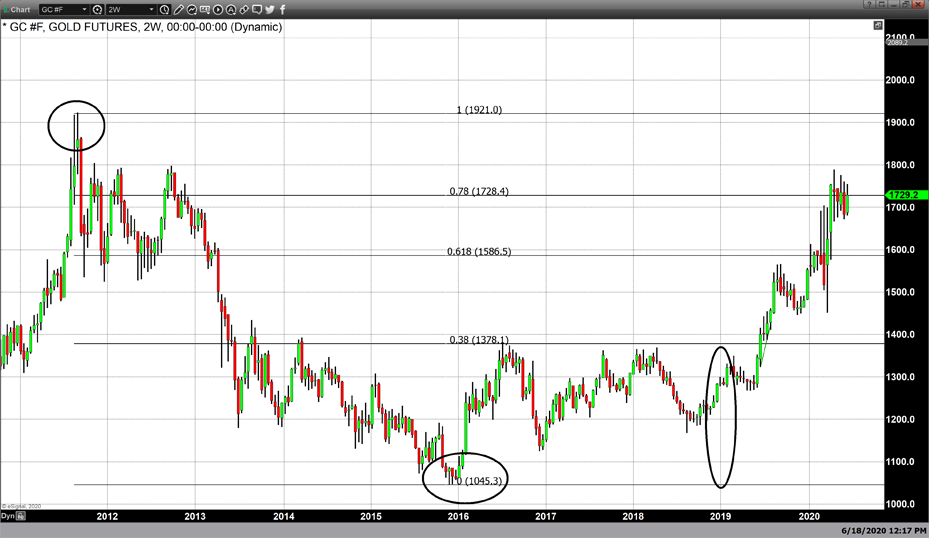 While many gold traders and investors have been frustrated at the lack of movement to the upside in gold it is important to take a historical perspective of where gold prices have been over the last four years.

While many analysts including myself are looking for higher pricing this year, most likely it will not be a decisive and clear path to the upside. Rather it will be a series of peaks and valleys that I believe will take gold prices take to $1800 and above by the fourth quarter of this year. The facts are that since 2019 gold has recovered roughly $500 of the value lost during the multiyear correction. Currently pricing is just under $200 from its all-time high.

This year has been ripe with fundamental events that have sent the global economy into a downward spiral. The global pandemic is far from being over and economic fallout that will…

Petra Diamonds downgraded to ‘equal weight’ by Barclays over coronavirus,