Gold Price Breakout In for a Big Test

Gold breaking out of range, big test at hand

Last week, gold was described as being boring, but that it was a good thing to be moving sideways because it meant it was building a solid base to rally from. With yesterday’s breakout, gold can has a shot at taking on a major hurdle from 2011/12.

Looking at three peaks formed during the topping sequence in 2011/12, there is a small, but strong zone from 1795 up to 1803. For spot gold to reach the 2011 high of 1920 it is the next barrier to focus on. It should not be surprising to see it struggle there, but perhaps it doesn’t. Which is why the two-month base from which gold is rallying from was a good thing despite it having been frustrating for short-term maneuvers. It may have helped build up enough power to push on through.

As long as the recent range breakout isn’t breached with authority the outlook will be viewed as bullish even if there is some initial struggles to cross 1800 with conviction. And if it does cross over the threshold then that major level of resistance will be viewed as a new level of support.

For now, running with a long bias until evidence comes in to the contrary. Silver is also lined up well as it has been a solid-looking trend since the March low. Watch for it to cross 18.38 to further along the trend towards 19.64, and possibly higher.

Find Out the #1 Mistake Traders Make 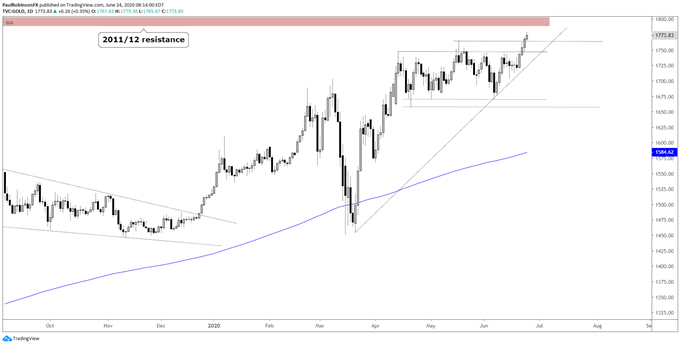 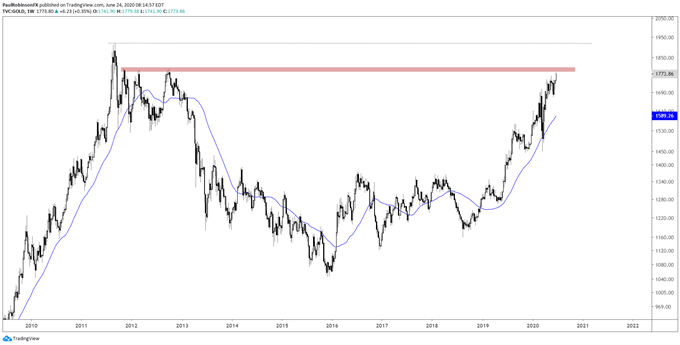 Whether you are a new or experienced trader, we have several resources available to help you; indicator for tracking trader sentiment, quarterly trading forecasts, analytical and educational webinars held daily, trading guides to help you improve trading performance, and one specifically for those who are new to forex.


Read More: Gold Price Breakout In for a Big Test

Gold Price Forecast: XAU/USD stays on the way to $1,800, shrugs off China-led

Update: Gold price reverses the pullback from intraday high while picking up the bids to $1,790, up 0.15% intraday,...

Gold markets initially pulled back during the trading session on Wednesday to reach down towards the 50 day EMA,...

NEW DELHI: Gold and silver futures prices dropped lower up on Tuesday, as a stronger dollar and optimistic comments...