A graduate of Ladoke Akintola University of Technology (LAUTECH), Ogbomosho, Oyo State, Osunleke Alaba, who recently returned his certificate to the institution requesting refund of his fees during his studentship, has received N500,000 start-up fund support from the alumni association.

Mr Alaba, who graduated from the Department of Agricultural Extension and Rural Development, had complained about the “worthlessness” of his certificate following his failure to secure job years after his graduation.

In a video that went viral, Mr Alaba caused a scene at the reception of one of the school’s administrative buildings, claiming his parents are already tired of his perpetual dependence on them.

He said if he received his fees charged him throughout his five-year programme, he could spend it to develop his innate artistic talent.

“I returned the certificate because it had no impact on my existence. I asked for a refund of the fees paid in school so I could use it to build my talent and live a meaningful life.

“I am an entertainer and even won the MTN talent hunt award during my service year in 2016.”

The father of two further said despite his efforts to improve the living condition of his family, he has continued to get advice for him to engage in ritual activities to be rich “but I can never do that.”

“My dad is 90 years old but I continue to borrow money from him rather than give him. All I seek now is help in any form for me to pursue my entertainment career. I don’t want my career wasted.”

Less than a week after the video clip of his weird request went viral on social media, the university’s alumni association came to his aid.

In a fresh post on his Facebook page, Mr Alaba said the alumni association presented to him a cheque of N500,000. 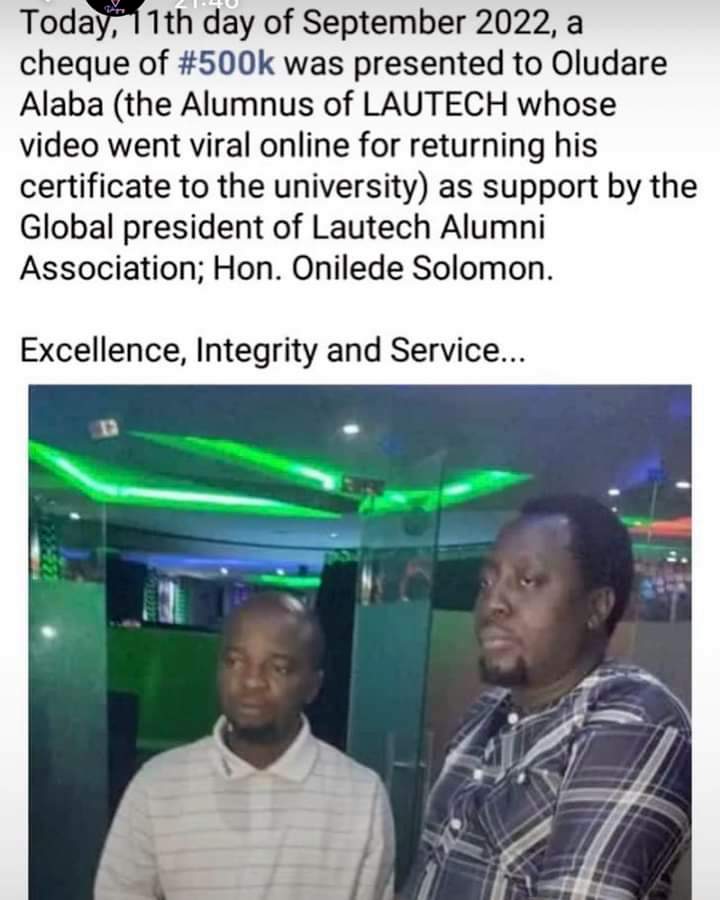 He said; “I hereby seize this medium to express my deep appreciation to the Global Body of LAUTECH Alumni as outstandingly led by the President, Hon. Onilede Solomon popularly known as LIMO, the Board of Trustees, and the Oyo State Chapter of the Association for their presentation of the #500,000 cheque to me today.

“May Almighty God continue to be with you and all members of the association for their show of love and support. I thank you, once again.”

The Top Cyberattacks Against Businesses