This idea must not die, By Sam Akpe

For someone who has spent 51 years as an active librarian and has been involved in research and documentation at the highest level and in institutions across the world, Nyaknnoabasi has been working on a legacy project that demands national investment intervention to make it a reality. It is called the BLERF —Biographical Legacy & Research Foundation (blerf.org).

He is my neighbour. We visit each other quite often. But I have done more of the visit than he has. I still recall the day I got the first telephone call from him. I was out of the city. He told me he was calling from the front of my apartment. After he mentioned his name, I froze in awe at being visited by him.

At that time, he had just moved into the building next to mine. He told me with laughter that henceforth, since we were neighbours, I wouldn’t succeed in running too far from him. His name is Nnyaknnoabasi Osso, the man who brought the first Presidential Library to Africa. Today is his birthday.

Nnyaknnoabasi has a reputation that is taller than his person. I didn’t say he is a short man. It’s just that dynamites, as the saying goes, usually come in small packs. His fame was designed on his birthday in 1971, when he got initiated into the library, knowledge and information management profession. That was the day he got a job as a kid library assistant at the University of Ibadan.

His story would have ended in that library if, after his studies in the same institution, he did not meet Professor Donald Ekong, the first Vice Chancellor of the University of Calabar. Ekong offered him a job at the university, but God had other plans.

As Nyaknnoabasi reached Calabar the following week to take up the job offer, he met the legendary Ray Ekpu who got him employed at the Nigerian Chronicle to start a library. Ray arranged for him to receive media library experiences in some of the best newspaper organisations in Britain and the US.

It was through Uncle Ray that Nnyaknnoabasi met the late Dele Giwa. For those who were familiar with the relationship between Ray and Dele, it would make no news that Nnyaknnoabasi ended up at Newswatch magazine, co-founded by the two journalists. Dele personally went to Calabar to seize him from the Nigerian Chronicle.

Nyaknnoabasi was already a star in the media library business before joining Newswatch, where he became a celebrity. It was at Newswatch that he wrote Nigeria’s first authentic biographical book, Newswatch’s Who’s Who in Nigeria in 1987. It was and still remains an award-winning book.

Always full of ideas, one day, through what could be described as divine arrangement, Nyaknnoabasi met with Chief Olusegun Obasanjo. That marked a turning point in his life, just like his first meeting with Uncle Ray. He became Obasanjo’s researcher. 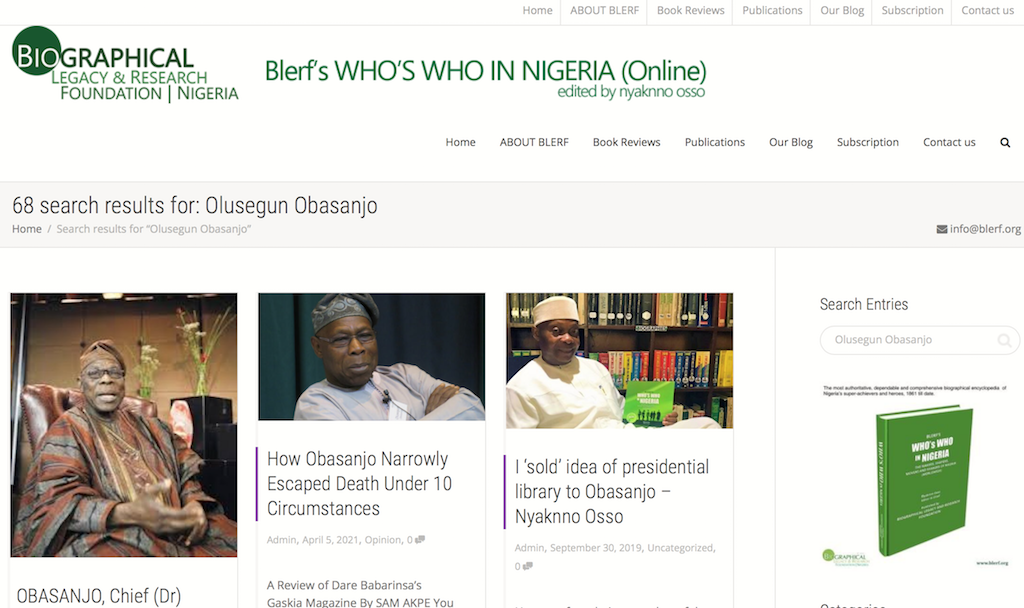 A few months later, he read an article in a foreign newspaper about America’s presidential libraries. Then he had a conversation on it with Obasanjo, who seemed to like the idea. Nyaknnoabasi went further to do more research on it and submitted a proposal on it to the retired general, who quietly read through the proposal and put it aside.

A few years later, Obasanjo was thrown into jail by General Sani Abacha on trumped-up criminal charges bordering on coup plotting. The old general spent three years, three months and three days (3.3.3) in prison, waiting to be executed. He was miraculously released in 1998 after the death of Abacha — the year Nyaknnoabasi published a book on the writings of Dele Giwa.

Something struck Obasanjo when he came out of jail. He noticed that his papers and other valuable items had either been destroyed, stolen or misplaced. He remembered the proposal on the Presidential Library and quickly sent for Nyaknnoabasi. The dream finally resuscitated.

Today, the Olusegun Obasanjo Presidential Library is a well-organised cultural and tourist centre, the first in Africa and one of the best in the world. It has been described as a city within a city, a pleasant gift to Africa. Nyaknnoabasi made it to happen.

Obasanjo’s idea was to build the structure at his Ota Farm. Nyaknnoabasi tried and finally convinced him that presidential libraries are usually built in the home state of the former presidents.

The following year, when Obasanjo became Nigeria’s elected president, he took Nyaknnoabasi with him to the Presidential Villa as Special Assistant on Library, Research and Documentation.

It was a vintage appointment. It gave Nyaknnoabasi the valued opportunity to tour the world for the realisation of his desire for the retired general — the building of a presidential library. But first he had to set up a State House Library at the Pilot Gate of the Villa.

Appointed as the Project Coordinator of the Presidential Library, Nyaknnoabasi had opportunities of meeting several American presidents while working on the project, but it was Bill Clinton who practically gave him a team to work with.

Today, the Olusegun Obasanjo Presidential Library is a well-organised cultural and tourist centre, the first in Africa and one of the best in the world. It has been described as a city within a city, a pleasant gift to Africa. Nyaknnoabasi made it to happen.

In his three-volume book, My Watch: Now And Then, Obasanjo states, “I have always known that one of Nigeria’s national weaknesses is poor record keeping and inadequate attention to institutional memory…

“Some materials from the Nigerian Civil War, which were already deteriorating were microfilmed. After some lost grounds and lost opportunities, Nyaknno and I belatedly began the recovery, restoration, preservation, storage, and acquisition of other materials and records…

“The work we did before I was sent to prison remained intact. On my release from prison, I reconnected with Nyaknno to continue with our work of recovering, restoring, preserving and storing… As soon as the possibility of my venturing into politics became a reality, Nyaknno joined me.

“On my inauguration, Nyaknno was one of the first appointed as Special Assistants and remained so until the end of my second term in 2007. His assignment was simple — to continue what we have started to ensure availability of records and to promote institutional memory…”

Even if he is shy of saying it out, BLERF needs money to achieve its mission for Nigeria. The money required is to sustain research costs from 1861; expand its geographical scope and institutional spread; maintain daily update of entries; keep the well-searched and research website afloat; fund necessary travels, communications, administration, power supply; and acquisition of computers with vast capacity for information storage.

In all, Nyaknnoabasi spent 25 years with Obasanjo since their first meeting, which is aptly captured in an upcoming autobiography. As my neighbour, I have been following up on Nyaknnoabasi’s vision and mission now that he has detached himself from Obasanjo and is getting close to 70 years.

For someone who has spent 51 years as an active librarian and has been involved in research and documentation at the highest level and in institutions across the world, Nyaknnoabasi has been working on a legacy project that demands national investment intervention to make it a reality. It is called the BLERF —Biographical Legacy & Research Foundation (blerf.org).

This is a massive information documentation idea that started 10 years ago. It aims at publishing Nigeria’s largest Who’s Who, covering the period from 1861 to eternity. This online publication, which has kicked off gracefully, but is presently slowed down by the lack of investment capital already, serves as Nigeria’s most reliable authority on biographical information on Nigerians worldwide. Access is currently free.

Biographical information is an area which individuals and governments are conscious of and should be interested in. However, many lack the passion to venture into this virgin field, which forms a core part of historical documentation, as well as nation building.

In sum, the mission of BLERF is to engage in research and document Nigeria’s history by focusing on the lives of its citizens. This massive online publication is a census of Nigeria’s achievers. In April this year alone, over 50,000 persons used information from BLERF’s website. This clearly indicates that the uncelebrated awareness of the project.

A few days ago, I tried to find out from Nyaknnoabasi what the next phase of the project is. He explained, “We are moving into our second decade and this presents a number of challenges. The population of the country is increasing, and every day Nigerians are excelling in many fields, and breaking records.

“There have therefore much grounds to cover, research into and documentation, not to talk of capacity building, and the purchase of new computer systems, ideal for the storage of vast amounts of information.”

Even if he is shy of saying it out, BLERF needs money to achieve its mission for Nigeria. The money required is to sustain research costs from 1861; expand its geographical scope and institutional spread; maintain daily update of entries; keep the well-searched and research website afloat; fund necessary travels, communications, administration, power supply; and acquisition of computers with vast capacity for information storage.

In a country that values information and research, this would be an opportunity to create a legacy and sell Nigeria’s achievements and opportunities to the world. It can still be done. BLERF is an idea that must not die.

Well, today is Nyaknnoabasi’s birthday. I just felt like saying ‘Happy Birthday’ to a man of ideas in the information business.

Sam Akpe is a journalist and editor.